Call Now To Be Seen TODAY

Diabetes affected over 371 million people in the world in 2012 and this is projected to increase to 552 million by 2030.

CALL NOW TO BE SEEN TODAY

Diabetes affected over 371 million people in the world in 2012 and this is projected to increase to 552 million by 2030. As podiatrists, we see endless diabetic foot ulcers. Diabetic foot ulcers (DFU) occurs in about 15-25% of diabetic patients, and about 15-25% of the cases require amputations. The likelihood of amputation is ~25-30 times higher among diabetics than the general population! It happens way too often... it starts off as numbness and tingling in the feet then progresses to a small ulcer, then to bone, then to amputation. As a podiatrist it is our goal to educate and help the patient so this doesn’t happen.

So what exactly is diabetes? Diabetes is a disorder of metabolism (carbohydrates, fat, protein) due to absolute/relative deficiency of insulin and is characterized by hyperglycemia. It clinically manifests as the 3 Ps: Polyuria, Polydypsia, Polyphagia. There are 2 major classes of diabetes, type 1 and type 2. Type 1 diabetes is immune-mediated damage to the pancreatic beta cells resulting in progressive loss of insulin production (about 5-10%). While type 2 diabetes is associated with insulin resistance and progressive decline in insulin production (about 90-95%). There are several environmental factors that are important with type 2 diabetes including obesity, sedentary lifestyle, diet, and probably sleep deprivation.

What is the physiology of diabetes? First, diabetes causes an increase in catabolism. Diabetes causes hyperglycemia, decrease in protein synthesis, lipolysis, wasting, and weight loss. When there is low glucose in the cell, there is decreased cell metabolism (muscle, liver) and with high glucose outside the cell there is glycosylation damage (ex: blood vessels) and polyol products causing osmotic damage. Now that word “glycosylation” is important. As a medical student one is often asked “how” diabetes causes damage and that one word will probably get you off the hook…”glycosylation”.

With macrovascular complications, one will need intensive treatment of their type 1 diabetes, including lowering hemoglobin A1C as this is associated with a 42% risk reduction in all cardiovascular events and 57% reduction in the risk of nonfatal MI, stroke, death from CVD. However, there has not been a large and long term controlled study showing decreased macrovascular disease event rates with improved glycemic control in type 2 diabetes.

Call Today to Schedule an Appointment

As a podiatrist, we often deal with sensory neuropathy as this leads to diabetic foot ulcers. But why does this occur? The mechanical, thermal, and chemical stresses increase leading to tissue breakdown.

The most common presentation of diabetic neuropathy is symmetric distal sensory polyneuropathy. About 50% experience this and it includes a burning, tingling pain in the feet that is typically worse at night. This is caused by a small fiber neuropathy leading to impaired mechanoresponsive nociceptors. Your podiatrist or family doctor may put you on medications to help with this neuropathic pain such as Gabapentin, Cymbalta, or a vitamin complex.

Since we talked about sensory neuropathy, we also see motor neuropathy with diabetic patients. This includes atrophy and denervation of intrinsic muscles with weakness which leads to alteration in biomechanics which in turn leads to pressure ulcers. Diabetes also significantly alters tendon fibril packing density because of the non-enzymatic cross linking of fibrillar collage, leading to a functionally shorter tendon leading to what we call equinus. Often a podiatrist will do an Achilles tendon lengthening during surgery when doing an amputation of the forefoot.

So how/why does the diabetic foot acquire wounds? First, the nerve damage decreases ability of the foot to feel pain and temperature. When you don’t feel pain or temperature a diabetic patient may step on an object and not even realize it. We had one patient step on a nail and didn’t know it was in their foot for a month. Thus it is important to monitor your feet daily, and if you can’t see your feet then put a mirror on the bottom of your bed or bathroom and examine them daily. Second, poor circulation results in decreased blood flow which leads to the decreased ability to heal and fight infection. Even small things such as an ingrown toenail can lead to a serious wound and infection. Third, nerves that control moisture may become damaged and this in turn leads to cracking and dry skin. All 3 of these factors lead to wounds and breakdown of the skin. Diabetic wounds also have much more difficulty healing. As one author put it, diabetic wounds are “frozen” in a chronic inflammatory state. 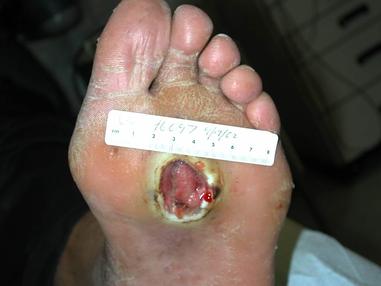 Re-ulceration is very high in diabetics, ranging from 30% to 87%. Many factors lead to the ulcers reulcerating and not healing, including unrecognized repetitive injury, peripheral sensory neuropathy, limited joint mobility, and structural foot deformity. The most prominent ulcer sites tend to be the plantar surface of the toes, plantar forefoot, plantar midfoot, and dorsal surface of the toes and the heel. Several foot deformities occur such as equinus deformity and limited ankle joint dorsiflexion leading to ulcers on the ball of the foot. Hammertoe or clawfoot deformities also tend to occur leading to ulcers on the tip of the toes, and dorsum of the toes and between the toes. Hallux valgus and hallux rigidus are also associated with ulceration of the big toe and 1st metatarsal.

Charcot foot, also known as neuropathic osteoarthropathy, may develop. This is a disorder that affects the joints, bones, soft tissues of the lower leg and foot due to uncontrolled inflammation which leads to osteolysis and progressive fractures and joint malpositioning. Chronic charcot leads to a collapsed plantar arch which then leads to plantar ulcerations.

Finding a good podiatrist is essential to helping heal these wounds, but more importantly is patient compliance and the patient taking efforts to help heal. A patient has to want to heal their ulcers. The cornerstones of treatment include appropriate wound care and debridement of wounds and pressure reduction. If a patient is told to be strict non-weightbearing and they go out walking on the foot daily, it won’t heal. It’s a team effort between the podiatrist and the patient. Prevention is key, and seeing a podiatrist is a proven way to be educated and monitored to help prevent diabetic complications. 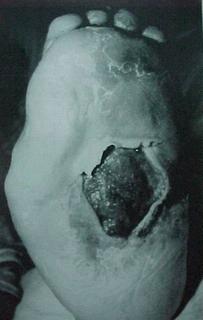 Please call now if you are around Las Vegas and suffer from heel pain, plantar fasciitis, neuroma, ingrown toenail , painful nails , warts, thick and long fungal nails, diabetic feet , or an ankle sprain. For information on what/why I use for my chemical matrixectomies for ingrown nails please visit this link.